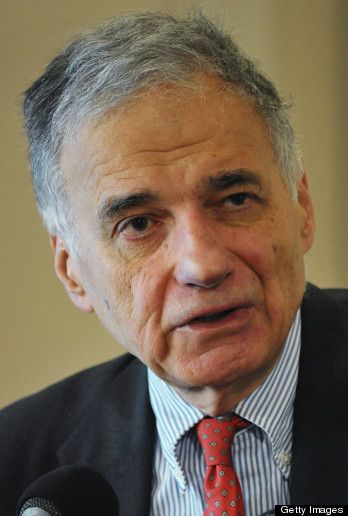 Nader, at left in a recent Huffington Post photo, told a dinner audience at the National Press Club that every significant government branch or important watchdog apparatus has been captured. He said the situation is far worse than he observed when he first worked in Washington in the mid-1960s.

Nader's talk had a bittersweet quality as he recalled working at a small office at the club following his graduation from Harvard Law School. He said he could look out from the club to the broken windows the Willard Hotel, a once and future luxury establishment between the club and the White House. Aside from such superficialities as downtown renovation, he said, much of the city has gone downhill, most especially Congress and the news media.

Nader spoke to the McClendon Group, an independent speaker society based at the press club. The chairman for a quarter of a century has been John Edward Hurley, who serves also on the board of the Justice Integrity Project among several other civic groups. Hurley, shown at right, introduced the speaker this way:

Ralph Nader's career as author, activist and presidential candidate has captured the attention of the American public over much of the last half century. Since he co-founded the non-governmental organization Public Citizen in 1971, this NGO now has over 225,000 members. His national media campaigns have covered air pollution, nursing home flaws, the insider atrocities that Congress cultivates, nuclear dangers to the political and world environment, Watergate, whistle-blowing, national security, the gigantic corporate strangleholds on democracy, and the Iraq war, to name but a few of his issues.

With all of his past activities, you would think that he would have difficulty coming up with something new. But if you think this, you would be wrong.