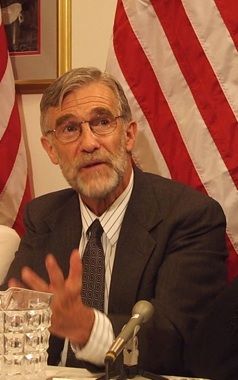 The mainstream media have kept the American public ignorant of vital news in deference to top political and military-intelligence officials, according to former CIA analyst Raymond L. McGovern.

McGovern, shown below, spoke July 2 to the Sarah McClendon News Group at the National Press Club in Washington, DC.

“Never has it been so bad in the 50 years I’ve been in this town,” said McGovern, 74, a peace advocate following a quarter century in the military and CIA, including five years overseas and daily briefing duties for White House staff of two presidents.

“There’s one change that dwarfs all the others,” he continued at the dinner lecture. “We no longer have a free media. That’s big. It does not get any bigger than that.”

Among his examples were self-censorship on what could have been significant stories by the Washington Post, its former subsidiary Newsweek, and the New York Times.

McGovern’s appraisal matches that of other media critics. The factors he described prompted me to found the Justice Integrity Project, for example, and then assemble a narrative of unreported and under-reported major stories into my recent book Presidential Puppetry: Obama, Romney and Their Masters.

On June 24, longtime DC-based investigative editor Charles Lewis described a similar journey at CBS News in his memoir 935 Lies. Lewis said that “lying” by government officials has become standard operating procedure tolerated by many timid reporters and their bosses. Lewis, a former network news producer, resigned from CBS 60 Minutes in 1989 over disappointment from watered-down coverage he saw. He founded the non-profit Center for Public Integrity and launched his book at the center’s 25th anniversary last month, as we reported here two weeks ago.

McGovern came to Washington in the early 1960s as an Army infantry/intelligence officer and then served as a CIA analyst from the administration of John F. Kennedy to that of George H. W. Bush. His CIA duties included chairing National Intelligence Estimates and preparing the President’s Daily Briefing, which he briefed one-on-one to President Ronald Reagan’s most senior national security advisers from 1981 to 1985.

Among McGovern’s examples of suppressed stories:

Former Bush administration NSA and CIA Director Michael Hayden last October joked during a forum organized by the Washington Post that President Obama should put Snowden on President Obama’s “kill list” of those to be assassinated by presidential order, McGovern said. House Intelligence Committee Chairman Mike Rogers (R-Michigan) concurred. McGovern noted that the Post failed to report the Mafia-style repartee at its own newsmaker forum.

More generally, McGovern said the media are keeping the public in the dark about central facts regarding recent deaths and fighting in Syria, Iraq and the Ukraine.

McGovern said that only Joints Chiefs of Staff Chairman Martin Dempsey’s last-minute intercession with President Obama prevented the United States from launching bombing attacks on Syria based on bogus claims that Syria President Bashar Al-Assad had used chemical weapons to kill more than a thousand persons Aug. 21 in a rebel-held suburb of Damacus.

Secretary of State John Kerry said 35 times, “We know” that Assad’s government killed the victims, McGovern continued. “He [Kerry] didn’t know. He was lying through his teeth.”

“It was the rebels who did it,” McGovern said of the sarin killings, whose victims included many children. “They wanted to mousetrap us into a war.”