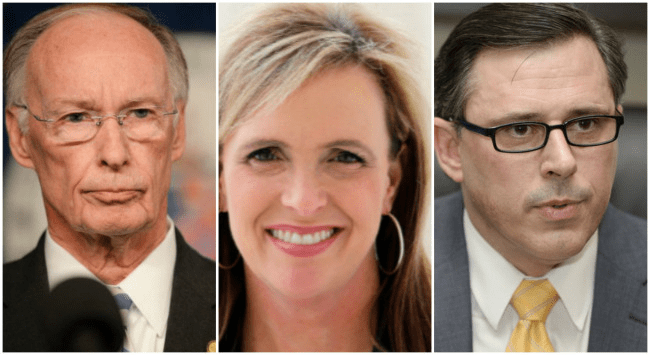 Today’s column provides an approach to understanding such allegations, which are increasingly common against high officials and candidates. Targets include Alabama Gov. Gov. Robert Bentley (R), who faces vast public pressure to resign or face impeachment. Bentley is shown below at left in a collage via WKRG-TV with his purported lover and top aide Rebekah Caldwell Mason, and former Alabama Law Enforcement Agency chief Spencer Collier, whom the governor fired after Collier protested what he called a scandal costing taxpayers huge sums.

Claims of sex scandal are increasingly common regarding high officials and would-be officials, as we reported this month here.

Our recommended approach, as voiced in a talk this month at the National Press Club, is for those in the public to remember four factors:

Those were the core points of my talk April 13 before the McClendon speaker society at the press club, which amplified the April 8 column DC Madam Attorney: Client Revelations This Week; Cruz News?

it described how Palfrey’s attorney, Montgomery Blair Sibley, threatened April 8 to release the government and business names of her clients unless federal courts grant a hearing on his request to release at least one customer name he describes as vital to the 2016 presidential race.