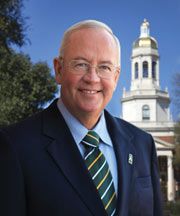 Famed educator and legal scholar Ken Starr led a forum last week at the National Press Club to inspire faith-based instruction — and then was asked to describe why he had helped billionaire Jeffrey Epstein avoid serious prison time in 2008 on allegations Epstein had molested dozens of underage girls.

The president and chancellor of Baylor University, responding to a question after the close of a forum he led Feb. 4 on “The Calling of Faith-based Universities,” told me he was “very happy” to help serve a client of his former law firm, Chicago-based Kirkland & Ellis. Starr, a former federal judge and U.S. solicitor general, is shown at left.

Thus, as so often the case in public life in the nation’s capital, a stark contrast arose between high-minded rhetoric and subservience to the wealthy.

Today’s column summarizes the perverted practices of the globe-trotting Epstein, 62, shown in a photo at right. We next examine Epstein’s powerful friends, allies, and lawyers on a legal dream team that included Alan Dershowitz, Roy Black, Jay Lefkowitz, Gerald Lefcourt, and Martin Weinberg.

Following that, we report how the attorneys arranged a sweetheart plea deal for Epstein in 2008. Starr played a key role in arranging lenient treatment for Epstein, whose federal-state prosecution

a decade ago occurred concurrently under the administrations of President George W. Bush and his brother, Florida Governor Jeb Bush (1999-2007) and Jeb Bush’s successor Charlie Crist (2007-2011), who had been state attorney general during the beginning of the Epstein case.

The Daily Mail of London reported new developments Jan. 2 in Andrew and the under-age ‘sex slave’: Duke denies claim in court papers that teen was picked to sleep with him by Robert Maxwell’s daughter. According to recent court filings in Florida’s federal court:

A plaintiff “Jane Doe 3,” later identified as a California native Victoria Roberts, accused Epstein as treating her as a “sex slave” beginning when she was 15 as part of a massive sex trafficking operation he ran exploiting girls in their mid-teens, below the legal age of consent.

Roberts, now 31, claimed that Epstein farmed her out to other men, including Prince Andrew of the British royal family, Epstein’s attorney Dershowitz, and French modeling scout Jean Luc Brunel.

The California native said the photo below left portrays her at center with Prince Andrew, also known as the Duke of York, on a trip to London when she was 17 in 2001. At right was Ghislaine Maxwell, the socialite daughter of the corrupt newspaper tycoon Robert Maxwell, who drowned in 1991 after toppling overboard from his yacht Lady Ghislaine. The death left one of the world’s largest media empires with a reported $3 billion in debts.

Roberts alleged that the Ghislaine Maxwell was girlfriend of the never-married Epstein’s who helped him both maintain contacts to top levels of society, recruited teenage sex consorts, and sometimes participated in the sex abuse, including of Roberts. The Roberts claims are part of her effort along with a Jane Doe 4 to join a suit filed six years ago by Jane Doe 1 and 2 against the federal government for violation of civil rights in agreeing to an overly lenient state plea deal for Epstein in 2008. 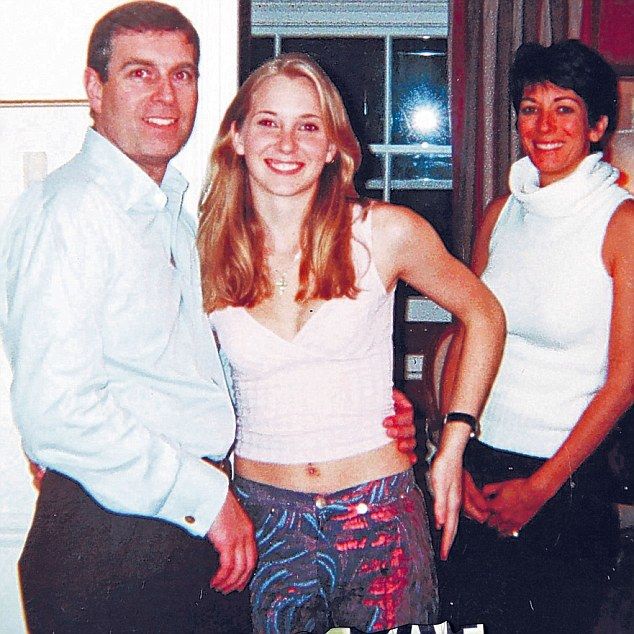 Maxwell, Epstein, Andrew and Dershowitz are among those who have denied the allegations, as have federal authorities. Epstein, in his first formal remarks on the revived scandal, last month condemned the “media frenzy” surrounding the case. He wrote that he and his associates “have been the subject of the most outlandish and offensive attacks, allegations, and plain inventions.”

The prince issued a strongly-worded denial via Buckingham Palace, saying “any suggestion of impropriety with underage minors is categorically untrue.”

As a big picture, Epstein’s money-making talents were even more exceptional than his perversions in trafficking in underage girls.

A list of Epstein’s contacts compiled by a Florida house manager listed access information for the Queen of England, the current King of Saudi Arabia, former President Clinton, former British Prime Minister Tony Blair, rock stars at the Mick Jagger and Michael Jackson level, fashion gurus, media moguls, and financiers at the Rothschild and Rockefeller level, among dozens of others wealthy, powerful contacts.

Their precise relationships with Epstein remain unclear in many instances, which is a natural consequence of the slap-on-the-wrist plea deal for him that short-circuited disclosure in the courts.

A week ago, the Daily Beast focused heavily on Starr’s role in a column entitled, Conservative Scold Ken Starr Got A Billionaire Pedophile Off. Reporter M.S. Nestel described how Epstein faced life sentences if authorities pursued their heavy documentation that he had assaulted and exploited high school girls on a systematic basis. Instead, the billionaire was sentenced for a single state charge of soliciting a prostitution.

Epstein went to jail nights for 13 months in a special wing of a local jail, maintained his freedom during the day, and emerged in 2011 to scoff at his critics, as reported by the New York Post in Billionaire Jeffrey Epstein: I’m a sex offender, not a predator. The newspaper reported that imperious ex-con used his $50 million New York City mansion to celebrate his release from a Florida jail “with his close pal, Britain’s Prince Andrew.”

Starr is, of course, the former federal judge and the independent prosecutor whom fellow judge David Sentelle, a Federalist Society activist supervising the nation’s independent counsels for 14 years, had appointed to replace a prior investigator of President Bill Clinton’s Whitewater financial transactions.

Failing to find actionable evidence on Whitewater, Starr expanded his probe to sex scandal allegations after receiving a tip about a sexual activity by youthful Defense Department employee, Monica Lewinsky, shown at right in an April 1997 photo. 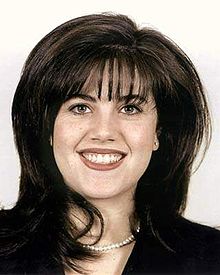 Under Starr in January 1998, federal authorities ambushed Lewinsky while she was shopping at a food court in January 1998, as she described in a 2014 Washington Post article, Lewinsky mistreated by authorities, that recalled her tears and panic while authorities held her during a 12-hour interrogation without a lawyer in a hotel room.

Agreeing finally to wear a wire to incriminate the president, Lewinsky helped Starr secure evidence that the president engaged in oral sex, leading to Clinton’s false denials. The House then impeached Clinton before he saved his presidency by winning acquittal in the Senate.

The Epstein case is worth studying in part because of the high stakes for sex scandals and blackmail at such levels. The Epstein scandal illustrates, yet again, a two-tiered American justice system where wealth and political influence can often win lenient treatment even in heinous, well-documented cases.

Furthermore, as we explore in a second part of our ongoing coverage this week, suppressed but videotaped sex scandals at this level of society and governance poses a serious threat of blackmail and other corrupt influence-peddling on major government and business decision-making.

As a preview: The Guardian on Feb. 7 published Video exists of underage sex with powerful men, based on a new affidavit Roberts filed the previous day. Her claim that the FBI likely possesses video alleges the goal of blackmail.

The plaintiff filings also claimed, “Epstein instructed Jane Doe #3 that she was to give the prince whatever he demanded and required Jane Doe #3 to report back to him on the details of the sexual abuse.” Roberts claimed that Epstein’s “‘lending’ of young girls to prominent international figures – foreign presidents and U.S. politicians and businessmen among them – was to ‘ingratiate’ himself and ‘so that he could potentially blackmail them.”

Roberts wrote also: “There were times when I was physically abused to the point that I remember fearfully thinking that I didn’t know whether I was going to survive,” Roberts said in a new court filing last week.