A prize-winning Swedish journalist noted for his left-wing, pro-NATO and anti-WikiLeaks commentary was revealed this month to have been a paid agent of Säpo, his nation’s security service.

Martin Fredriksson, shown in a file photo and a winner of a major investigative reporting prize in 2014 for his work exposing right-wing groups opposed to NATO, has been secretly paid for years by Säpo, the Swedish Security Service, according to news reports based on his own admissions.

In deep intrigue that resembles a spy novel, Fredriksson’s story undermines conventional wisdom on both sides of the Atlantic that journalists work independently from power centers, including government agencies. 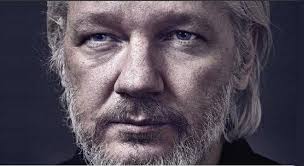 Authorities have targeted Assange (shown in a file photo) for what appears to be a trumped up sex scandal probe that has extended for nearly six years, apparently in reprisal for massive and ongoing disclosures by WikiLeaks of Western governments’ dark secrets.

Sweden, which has long boasted of an official position of neutrality in world affairs and close adherence to humanitarian and democratic principles under a rule of law, has already hurt its image by the Assange case. The fallout includes a ruling last month by a United Nations panel that Assange’s political asylum in Ecuador’s embassy in London since June 2012 to avoid extradition amounts to “arbitrary detention” under international law.

The Indicter, a start-up global human rights commentary site, underscored in columns March 6 and 13 the sinister implications of the revelations, especially the seemingly odd mixture of Fredriksson’s advocacy against Assange and in favor of NATO. It revealed, for example, that Fredriksson used his clout to lobby for Amnesty International opposition to Assange.

The editor is Dr. Marcello Ferrada de Noli, a longtime Swedish medical school professor and human rights advocate shown at left. He drew on disclosures March 2 about Fredriksson in SVD (Svenska Dagbladet, or Swedish Daily) to illustrate a broader theme: that Swedish officials and thought leaders defer far more to the United States and authoritarian policies than commonly understood in liberal democracies, including Sweden.

Ecuador granted Assange political asylum in its London embassy three and half years ago to protect him from a relentless effort by Swedish authorities to extradite him for questioning over rape and sexual assault allegations arising from two affairs he undertook from invitations by women attending his featured speech at an August 2010 conference in Sweden.

Assange submitted to questioning about the claims from the two women, who had separately invited him to stay with them. Authorities have never charged him with a crime but they have mounted an extraordinary campaign to extradite him to Sweden for further questioning after he left the country.

Assange has denied any criminal violation. Also, he has argued unsuccessfully in British courts that the investigation has been a ruse to extradite him to Sweden so he could then be extradited to the United States to face reported but still-secret U.S. charges. Assange is not subject to extradition directly from Britain to the United States. U.S. charges are reported to arise from WikiLeaks disclosures that severely embarrassed officials in the United States, Britain, Sweden and elsewhere in Western governments and private power centers.