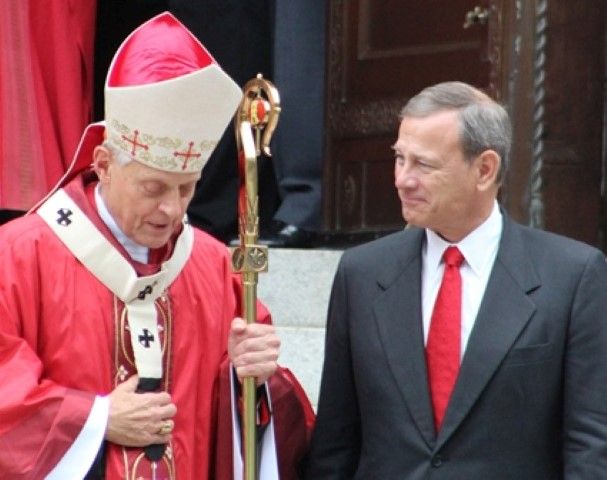 The Red Mass and the separate Washington Ideas Forum unfolded flawlessly in the nation’s capital over recent days — but underscored also the limits of what even informed citizens can learn about civic affairs.

Today’s report explores lessons from these events and suggests ways that individuals can seek to learn and be heard even when events rely on eminences who deftly avoid the toughest face-to-face questions.

We cover first the annual Roman Catholic Red Mass ceremonies Oct. 4 intended to inspire judges, lawmakers, and other public officials. As usual, this year’s services attracted U.S. Supreme Court justices and other prominent officials to the Cathedral of St. Matthew the Apostle.

A special feature this year was Donald Cardinal Wuerl’s reflections — he entitled them “Scenes from the PopeMobile” and “What Now?” — based on the historic visit to America last month of Pope Francis I, whom the Cardinal closely accompanied. The cardinal, at left, is with U.S. Chief Justice John Roberts in our photo as they were leaving the historic church located two-thirds of a mile north from the White House.

That program organized in cooperation with the Aspen Institute was informative, useful and entertaining, with much it now available for free viewing on the Atlantic’s YouTube channel, C-SPAN, and elsewhere.

One overall impression is how smooth and otherwise compelling most leaders can be, even when questioned at length by well-known journalists seeking to bring out new information in a memorable manner. Another takeaway is that at least some topics remain too hot to handle. Therefore, even the best forum sessions complement but do not replace investigative fare and commentary from alternative outlets.

The Red Mass originated centuries ago in Rome, London and Paris, and was launched in the United States in 1928. The services are organized by the John Carroll Society, which is named for a leading drafter of the U.S. Constitution. Carroll later became the first Roman Catholic archbishop in North America. “Its purpose,” Carroll Society members say of the Red Mass, “is to invoke God’s blessings on those responsible for the administration of justice as well as on all public officials.”

Officials can use words as a tool for truth or confusion, Atlanta Archbishop Wilton Gregory stressed in the mass’s featured homily or sermon. Gregory used the Genesis story of the Tower of Babel to illustrate a lack of understanding among the world’s peoples. 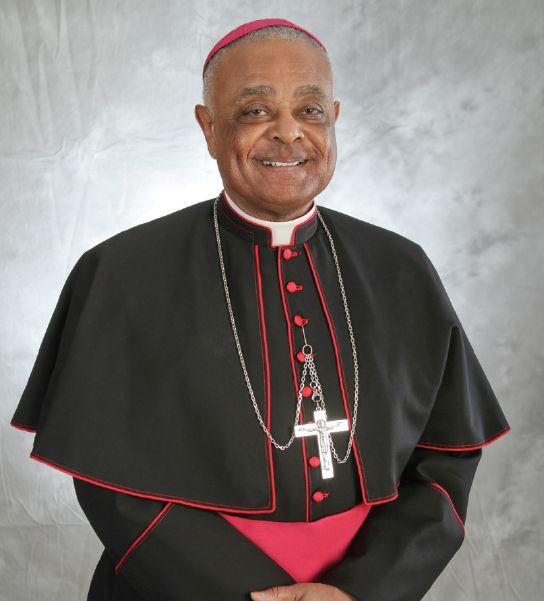 Shown in a file photo, he prayed that officials would be wise and truthful, but warned that such qualities can only be sustained when officials undertake their tasks with humility, including proper respect for God.

After the religious services Cardinal Wuerl spoke at a brunch at the Capitol Hilton to share highlights of the papal visit to the Washington, DC region and its larger lessons. Wuerl has been the longtime archbishop of Washington whom Pope Benedict XVI elevated to the College of Cardinals in 2010.

The cardinal recalled from his motorcades that the pope constantly opened windows of a modest-sized Fiat and urged the driver to move closer to crowds so he could better connect with the crowds, especially the powerless.

“One of the things I love about this pope is that he is the same in public and in private,” the cardinal continued. “He’s the same whether he’s meeting a president, or a chief justice, or a child who has been handed over a railing to him.”

We shall continue those remembrances below, but first want to provide more detail on the Washington Ideas Forum, which convened an extraordinary array of prominent speakers for two days beginning Sept. 30 at Harman Hall near the historic center of downtown Washington, DC. One purpose is to help readers here access the materials. Another is to underscore how even a fairly long interview has difficulty revealing all we need to know about the powerful, or even the once-powerful.