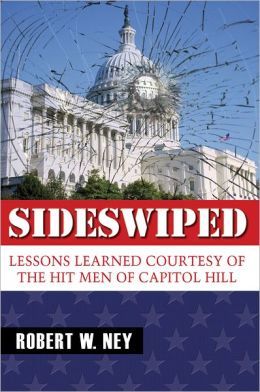 Former Congressman Robert Ney of Ohio last week created headlines, at least within Washington's insider media, by publishing his memoir, Sideswiped. The book recounts his political career, imprisonment for corruption, and efforts to redeem himself through Alcoholics Anonymous and otherwise.

Of particular relevance to readers of our work at the Justice Integrity Project, Ney's final chapter protests the political frame-up of Democratic former Alabama Gov. Don Siegelman, who now serving a long prison term on trumped-up corruption charges. Ney, a Republican since his college days, describes the Justice Department's Siegelman prosecution as proof-positive that injustice can occur without redress even when the facts are thoroughly documented in court filings and investigative reports.

I found his book engaging and enlightening, even though he doubtless pulled his punches in a few of his political recollections.

He did take a hard shot at House Speaker John Boehner, a fellow Ohio Republican congressman whom Ney believes double-crossed him and the country. Another newsworthy element of the book is Ney's complex reaction to the recent reform advocacy of fellow ex-convict Jack Abramoff, the GOP lobbyist whose intrigues toppled Ney. I had the opportunity to discuss these topics at Ney's book launch party last week at The Monocle, a restaurant almost adjoining the U.S. Senate offices.

Before describing those matters, including a gaffe of mine captured by C-SPAN, I want to share what I found most valuable about Ney's book.

He provides an unusually candid chronicle of how he entered politics in the early 1970s primarily as a way to find employment. A native of a mountainous and largely Democratic locale in Eastern Ohio, he advanced to high levels in the GOP by party loyalty, support for leaders, and close attention to constituents.

Ney's account of early career help via politics is somewhat unusual for a successful politician, but correlates in a general way with the research findings in my forthcoming book, Presidential Puppetry.

This investigation of a century of public life and its implications for the Obama second term is scheduled for publication later this month. I describe the ascendancy of political leaders, including presidents and their cabinets, whom we in the public are trained to regard as committed visionaries and warriors on behalf of voters. My research suggests that many are merely the visible spokespeople for more powerful decision-makers who prefer to operate in private via their surrogates in Washington.