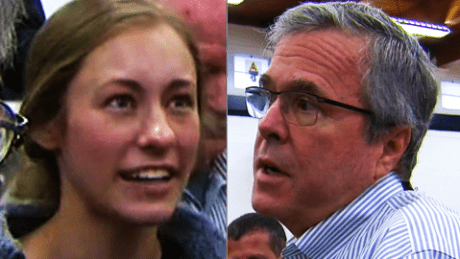 What questions should reporters ask 2016 candidates?

The social media site “Linked in for Journalists” is posing that question to its 30,000 members about presidential candidates, but the concept is readily applicable to candidates seeking lower-level federal posts.

This exercise is worthwhile even though front-running candidates avoid meaningful responses, especially given the ridicule prompted by the recent responses by Republicans Jeb Bush — Stewart To Jeb Bush: ‘Thank You. Was That So Hard?’ — and Marco Rubio to inquiries about their views on Iraq.

Yet it’s useful for the rest of us to identify the best questions. We can then see, if nothing else, the gap between the typical campaign coverage and what really matters.

Bush and University of Nevada college student Ivy Ziedrich are shown after she challenged him during a campaign appearance in Reno last week. She made worldwide headlines by asking him about Iraq policy in ways few reporters have the gumption or opportunity to do.

My list below of suggested questions includes the usual core basics on jobs, health, war, and taxes.

Also, we should explore deeper historical and personal secrets, including those regarding a candidate’s taxes, health, religion, and money-making — all topics that candidates increasingly declare off-limits.

But with the stakes so high for the public, no one should be trusted who keeps secrets. Their silence becomes in effect a pledge of allegiance to their puppet masters — and not to voters.