U.S. Hawks Beat War Drums Over Ukraine; Where Is The Free Press? 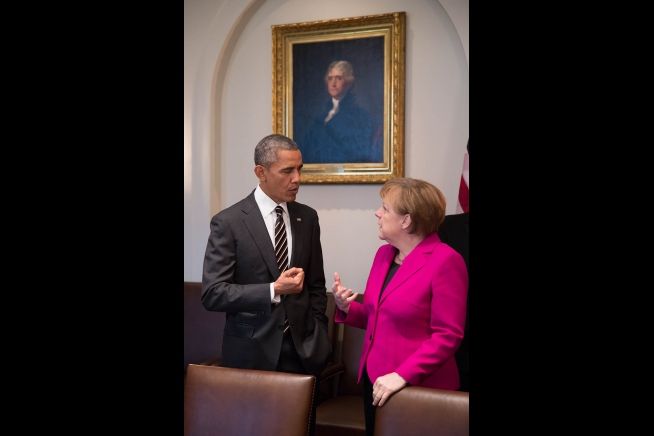 President Obama held an outwardly inconclusive bilateral strategy meeting Feb. 9 at the White House with German Chancellor Angela Merkel that masked a deep struggle between war hawks in the United States and European allies. They are shown below in a White House photo taken in the Roosevelt Room.

So far, the president and several of his advisors have resisted intense, bipartisan pressures from Congress, Wall Street and the establishment media to escalate U.S. arms support for the faltering Ukrainian government.

Such shipments would almost inevitably mean more U.S. training and other escalation. Although Russia has incurred serious hardship from sanctions and oil drop prices as widely reported there are countervailing developments little noted that help sustain its position and hurt Europe and the United States. Russia has been taking long-term measures, for example, to win such allies as the other BRICS nations (Brazil, India, China and South Africa) in trade agreements that reduce the impact of sanctions and dollar-based trading.

We have followed this debate closely for more than a year since taped conversations revealed the United States had orchestrated the coup in February 2014 that changed the country’s government and installed the current leaders.

Our research spans a full range of commentators. This editor attended, for example, the announcement at the Atlantic Council Feb. 2 of its major position paper seeking escalation and participated in a conference call the next day with the Ukraine’s new finance minister, U.S. native and former State Department employee Natalie Jaresko. She has lived in the Ukraine the past two decades and become a player with the help of $122 million in U.S. Agency for International Development funding. She answered questions from prominent news organizations. Our research includes also alternative commentators from the United States and Europe, including from the rebellious and largely Russian-speaking sectors of Eastern Ukraine known as the Dombass.

The current situation appears to be extremely dangerous. Reuters reported over the weekend, Merkel defends Ukraine arms stance in face of U.S. criticism.

Her concerns were pooh-poohed by those making the case for U.S. escalation at an important forum hosted in Washington, DC by the Atlantic Council Feb. 2, “The Ukraine Crisis: Withstand and Deter Russian Aggression.” 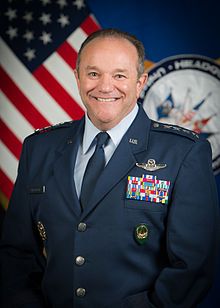 The New York Times broke the story U.S. Takes New Look at Arming Ukraine Forces, Officials Say of the new pressure by the neo-conservative and neo-liberal opinion leaders to double-down the United States investment in the Ukraine in the face of military, diplomatic and financial reverses for the West there during recent weeks following the overthrow of Ukraine’s government a year ago.

Brookings Institution President Strobe Talbott helped lead the way last week in a joint report by him and seven other prominent centrist former diplomats and military leaders in urging a $3 billion “non-lethal defensive” arms and training rescue package for the Kiev-based Ukrainian government to begin as soon as possible and extend over the next three years. Talbott said Russia has committed “act of war” in the Ukraine.

Russia denies sending organized troops, only permitting volunteers. Virtually no debate has occurred in Western media regarding amounts of Western military and intelligence help so far for the Kiev government backed by the West. At the Atlantic Council forum, however, speakers estimated 150 to 200 Russian military personnel in the Ukrainian and an unspecified number of U.S. personnel.

NATO’s top commander in Europe, General Philip Breedlove, shown in his official photo, has said weapons and equipment and other equipment are an option. As a sign of the pressures for escalation, his statement was unusual but little noted as such. The United States tradition has been for the military to defer to civilian leadership on policy.

Commentator Robert Parry, who broke the Iran-Contra scandal in the 1980s as an Associated Press and Newsweek reporter, wrote this week in Wretched US Journalism on Ukraine that he has never witnessed the media march so much in lock-stop to the leaks and pronouncements of the U.S. Department of State and other Western authorities. This includes, he wrote, the media’s parroting of the “Weapons of Mass Destruction” canard enabling the Iraq war in 2003.